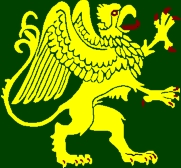 The emblem of the unit is a griffin. This symbolizes vigilance and courage. According to Greek mythology, the griffin was a creature with the head and wings of an eagle and the body and legs of a lion, and it originated from the ancient Hitties of Asia-Minor. Griffons were also a common subject in the sculptures of the Assyrians and the Persians. Greek legend has it that the Hiperboreans used a griffin to protect their gold treasures from the one-eyed Arimispians who continually tried to steal it. The Hiperboreans was a nation who lived in the Northern parts of Europe. The dramatist Aeschylue refers to the griffin as the “hound of Zeus” and according to him they were to be his horses while travelling in his war carriage of the sun. In the heraldry the figure of the Griffin on the arms present VIGILANCE. The griffin was received as symbol on the 31st October 1969.

THE INCEPTION OF 3 SA INFANTRY BATTALION

On 28 November 1961, SADFO 181/61 Inception and Allocation of units of the Permanent Force, was issued by Commandant-General P.H. Grobbelaar.  This SADFO contained the name of 3 SA Infantry Battalion, leading to the unit's inception on 01 January 1962. On 17 January 1962 the newly appointed Officer Commanding, commandant J.J. Wahl, and personnel gathered at Auckland Park where the purpose, training and other commitments of the unit were explained. The housing arrangements and facilities at Lenz were also discussed. After thorough deliberation it was decided that the new base would have its headquarters at Lenz. The first Citizen Force intake (200 members) arrived at Lenz on 29 March 1962 with quarterly intakes thereafter.

AIM OF THE UNIT UPON INCEPTION

The originalaim of the unit was to train Citizen Force Members (National Service) as infantry soldiers.

CHANGE IN TRAINING AND UTILIZATION

The unit was given operational status - an additional responsibility.   Two infantry Battalions were organized under the command of one Commanding Officer.   During 1970, 3 SA Infantry Battalion was transformed into a force-in-being. National service intakes now took place biannually, in January and July.   This resulted in very large intakes.   From January 1969 to January 1971 over 3 000 national servicemen passed through the unit. The role of the unit changed temporarily from the training of national servicemen to training Citizen Force members in 1987.

Training was mainly in urban counter-insurgency operations. In March 1987 the Chief of the Army instructed that companies of the State President's unit complete the last six months of their training at 3 SA Infantry Training Unit, to be deployed in operations.

National Service intakes ceased when the unit moved to Kimberley on 05 December 1988.

The units’ main responsibilities now were training and operational.   In 1989 the unit was settled at Diskobolos in Kimberley under the Northern Cape Command.   The new source of manpower was volunteers with recruitment mainly from the Northern Cape, Orange Free State and Transvaal.  The first voluntary intake arrived in January 1990.

During 1997 the unit changed to the training depot of the Army. The first female intake for Voluntary Military Service took place in January 1999. In January 2005 the unit had it’s biggest  Military Skills Development System(MSDS ) intake ever. About 2000 recruits were called up, but only 1937 arrived for Basic Military Training. The unit also presents formal training to Permanent Force members of the SA Army.

Monuments originated in the earliest times. It is established when an event, incident, or the conduct of people made such an impression on a nation or group, that these commendable events or individuals are done homage by erecting a monument. Especially deeds of people paying the ultimate sacrifice out of patriotism for a common cause in times of wars are honored in this way.The aim is that monuments at present, and among descendents, constantly remind them about the heroes of the past who were prepared to pay the ultimate price, in order to make the present possible, and to secure the future.

Furthermore, it is a unique character of monuments that they convey a message and are inspiring. Those who look at a monument are touched and encouraged to also be committed, and if necessary to bring the highest sacrifice for the cause being contended.

The portrait is one and a quarter size of a soldier, resting on a reversed arm, and in doing so, pays respect to the deceased. The rear screen is 7m high and 3,5m wide.

With the moving of the unit between Potchefstroom and Kimberley the monument was temporally moved to Eerste Vesting church in the then NW Command. At the beginning of 1996 authority was asked for the establishment of the monument at 3 SAI Bn in Kimberley. The monument was established and moved from Eerste Vesting church NW Command to 3 SA Infantry Battalion at Kimberley over the period of 28 October 1996 till 30 October 1996. The unveiling of the monument took place on 4 April 1997, the 35th anniversary of 3 SAI Bn. Annually on 4 April, a commemoration service is held to remember fallen soldiers.

On 17 April 1971 3 SA Infantry Battalion received its colours from Commandant-General R.C. Hiemstra. 3 SA Infantry Battalion received the Freedom of the City of Potchefstroom on 27 May 1988.   A parade was formed at the city hall where the scroll was received.  A march-past follows through the streets of the town after which guests of honor and senior officers attended a luncheon at the city hall.

The Freedom of the City was conferred upon 3 SAI Bn on 13 April 2005. 3 SAI Bn is the Fourth military institution to be honoured with the Freedom of the City of Kimberley. Many civilian executives attended this event.  Serving members of the Sol Plaatjie Municipality among others, were the Executive Mayor Mr Leniyibi who handed the scroll over to the Officer Commanding Lt Col A.P. Grobbelaar.