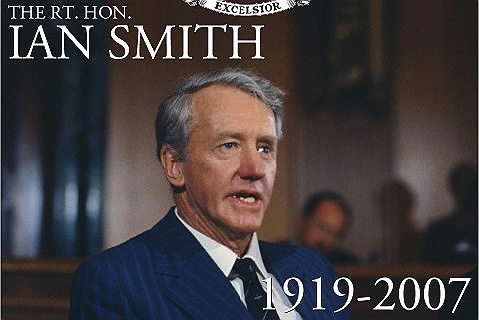 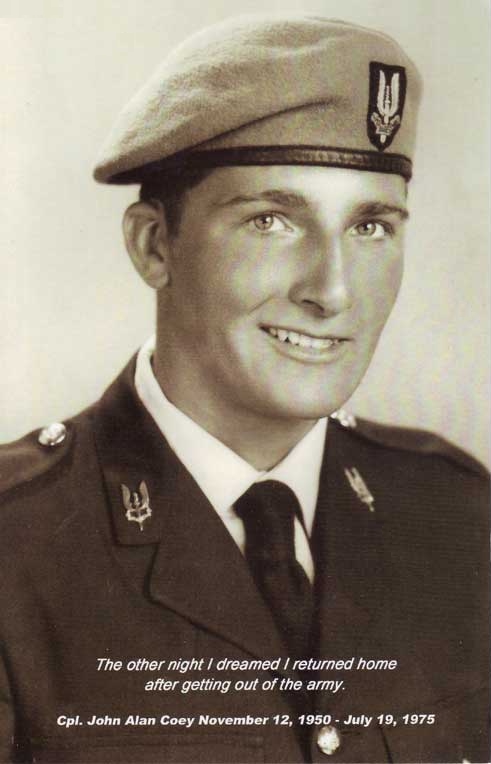 Corporal John Alan Coey would have been 57 years today, but died nearly 33 years ago on a remote Tribal Trust Land in Rhodesia, Africa at age 24. He was fighting, nearly toe to toe, with Chinese and Soviet trained communists who used midnight terror tactics attempting to convert tiny Pro-West Rhodesia into the Marxist State Zimbabwe is today. He fought hard, as I did, in this classic Cold War Chapter for three years and four months until the moment he was killed attempting to rescue a fallen comrade. I had a curious thought when Rich Byrne, who lost his uncle RLI Trooper Joseph Patrick Byrne, in the same war, asked me to say a few words as a fellow “Yank” combatant in that little understood – Rhodesian Bush War.

By a simple twist of fate it might have been John Alan Coey writing about me today instead of me about him. John Coey was the first of five Americans killed in action in that war and all were killed in the most blooded and bloodied of the regular Rhodesian Army units, The Rhodesian Light Infantry, known simply as the “RLI”. This unit lost a total of 85 KIA (Killed In Action) which included not only John Coey, but another four “Yanks” as well: RLI Sgt. High P. McCall, Trooper Stephen M. Dwyer, Trooper Joseph Patrick Byrne, and Trooper Frank Battaglia.

John was a high achiever in school in a Columbus, Ohio suburb. He starred in track and quickly became an Eagle Scout. He received his degree in forestry from Ohio State University and immediately decamped to fight in the Rhodesian Army in March of 1973. “We never saw him again after he left,” said his Mother, Phyllis Coey who now lives in West Liberty, Ohio and looks after her 101 year old mother. Phyllis is 81 and John wrote often telling of his trials and joys in a very tough army. She compiled his letters in a book called A Martyr Speaks. The cover photo shows John on patrol in Rhodesia carrying a US Flag, a very fitting symbol because all of us “Yanks” were certain we were also fighting to prevent Communism from one day engulfing the USA. We felt we were fighting ‘Our Fight’ for the preservation of The West. John’s letters indicate he felt as I did. Part of a wonderful cause to preserve Western Civilization.

It was no accident that John’s RLI was the most bloodied of all outfits. They saw combat on almost every deployment. When CTs (Communist Terrorists) were spotted about 20 RLI troopers would board a “jump” plane, fly to the combat zone, and literally parachute on top of the terrorists. Yes, these RLI Troopers were often being fired up at by the communist terrorists while descending in parachutes. But John also introduced a medical innovation to the RLI that saved lives, but ironically contributed to his own death. After years on combat duty Corporal Coey was trained as a combat medic and by RLI tradition he would have stayed back in base camp while his platoon was on patrol. But John prevailed upon the Colonel to permit combat medics to patrol with their regular units and he was the first. His mother claims her son’s motives were two-fold. “He wanted to save lives and also to save souls if a soldier was mortally wounded.” Corporal Coey was on patrol as a medic when he was killed while attempting to rescue a wounded comrade. He could have been sitting in base camp, waiting for casualties to be brought in. Phyllis had forged her son’s Christian faith so strongly he never lost it. And John had a reputation as an overly serious soldier and sometimes got kidded about it. “I was told I take life too seriously.” Coey wrote. “That doesn’t make sense to me. I live life deliberately and with purpose.” Fellow comrade-in-arms RLI Trooper Roger Buckley said this of John. “John was affectionately called ‘Doc’ by everyone in the RLI and was highly respected by all.” Buckley also thinks Coey should have received a valour medal for bravery under fire on a number of occasions. As an American who also served I know John would have been very proud of his service. Of the relatively few “Yanks” who did serve in that war we were proud of our contribution in bringing down The Berlin Wall. John Alan Coey chipped away at that wall and his contribution is as noble and valid as that of any Korean, Vietnam, or any other Cold War veteran. Yes, John won his part of The Cold War and if our roles were reversed today, John would have said the same of me. Keeping that Pro-West Rhodesia alive against a communist onslaught from 1965-1979 was a cause worth dying for and John and I felt it then. I feel it still. A well spent John!

Rhodesia was never beaten in battle, but was betrayed most specifically by the Jimmy Carter Administration- 1977-1980-which sacrificed Rhodesia on the altar of race politics in the USA. The Carter administration launched a huge spy operation against Rhodesia and worked tirelessly to install Marxist Robert Mugabe in the new Zimbabwe. Britain assisted. Those two big thumbs – on the communist side – were just enough.